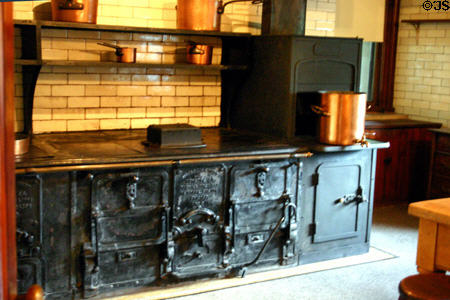 A place where architecture and interior design for kitchens began, the pantry is a transitional space between kitchens and dining rooms.  Also used as staging areas for serving meals, the Butler’s pantry could be visible to guests. Therefore, the pantry required more of an aesthetic appeal than its neighboring space, the kitchen.  As a result, the butler’s pantry was adopted as a place of food storage and where architectural design for the kitchen began to come to life in the home.

As technology advanced with the inventions of different kitchen appliances, and the amount of home fires declined due to more preventative measures and fire retardant materials, the kitchen became a central part of the home.

Before the kitchen had a central role within the home, it was the central part of the servants’ quarters. For servants up to stewards, the lifestyle within an estate was far less luxurious. The Butler’s pantry in an estate was often the most beautiful room of their quarters that a servant would work in, aside from the rooms of the estate that the family and guests occupied. The pantry, a transitional space between the estate and servant’s quarters, played an interesting bridge-way between the two lifestyles.

The photo above is of the butler’s pantry in the Frederick William Vanderbilt House of Hyde Park.  This pantry can be found in the home between the great hall and the dining room. Although it was a room for labor, interior and architectural design is apparent in the millwork. Within the cabinetry and doorways, one can see framing details, and along the ceiling edges there is crown molding. In addition to the woodwork, there is also detailing in the railings over the cabinetry along the lofted storage space above.

The architectural firm of Mckim, Mead, and White built the home, it was the fifth of    seven projects built by the firm for the Vanderbilt family. Frederick was the seventh of William Henry Vanderbilt’s nine children and the first of Commodore Vanderbilt’s descendants to receive a college degree. In 1878, he married Louise Anthony Torrance, who was a divorcee and twelve years older than him. Many speculate that this upset his father and may have been the reason for his small inheritance of ten million dollars. The inheritances received by his older brothers were ten times that amount. In 1895, Frederick Vanderbilt purchased an abandoned neoclassical villa on the Hyde Park property, and hired Mckim, Mead, and White, to transform it into his home and the historical architectural landmark that it is today.