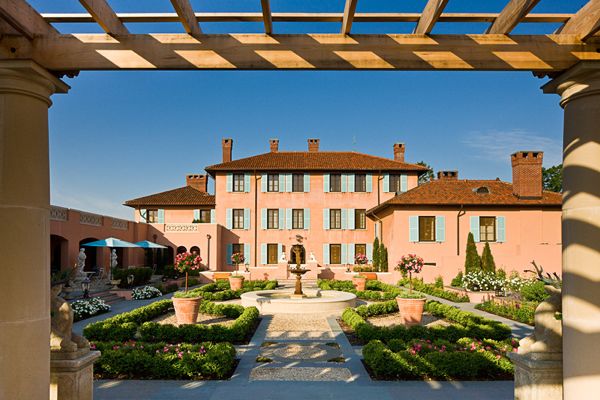 Goelet commissioned the architects Carrère and Hastings to design a country villa in a Tuscan style. Goelet’s wife, the former Miss Elsie Whelen of Philadelphia, had always wanted to live in an Italian villa. The house features a central courtyard with an Italian marble fountain, and ochre-colored stucco walls. Beatrix Jones Farrand was hired to landscape the grounds, and Samuel Yellin did the ironwork for the house. The estate and its storied hunting grounds became a regular haunt of Babe Ruth, and the Duke and Duchess of Windsor.
Goelet hosted numerous sporting-set events at the estate, including equine ice-racing. Goelet’s son, Peter, began radio station WGNY on the grounds of the mansion in 1930.
Abraham Prusoff purchased Glenmere mansion during World War II. Prusoff turned the private mansion into a resort hotel with amenities including a golf course, ski run, and tennis courts. In the 1970’s the mansion and estate were seized by Orange County as a tax lien due to Prusoff’s inability to keep the estate’s finances in order. In 1985 the mansion and estate were purchased at a tax auction by real estate magnate Rickey Mandel.
In 2007, under new ownership the mansion became a luxury 19-room hotel, restaurant, and spa, after undergoing an extensive restoration. The home still has many of its early 20th century features. Another great home filled with history, I encourage all to visit the property and enjoy the architectural masterpiece that it is.