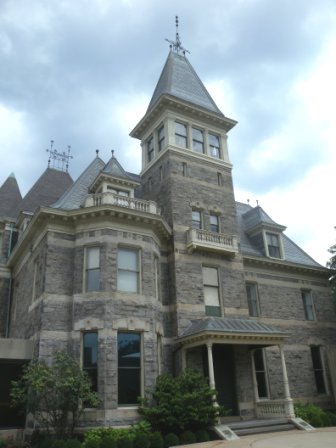 The Glenview Mansion listed on the National Register of Historic places as the John Bond Trevor house, is located on Warburton Avenue in Yonkers, New York.  The stone house, designed by Charles W. Clinton, was built in the 1870s in the late Victorian architectural style.  John Bond Trevor, a New York Financier, built the home as a small country estate that he could commute to his job from by rail.

I just can’t get enough of all of the exquisite details throughout the home. From the mill-work and entablature, to the hardware and other ornamentation, this home’s aesthetic is truly a work of art.

The house is built from locally quarried Greystone, and laid in rough-hewn blocks with Ohio sandstone ornamentation. Inside the home there is Eastlake Cabinetry by prominent Philadelphia cabinetmaker Daniel Pabst. The home also has a hipped roof surfaced in composition shingles.

Trevor and Clinton had worked together closely and put a great deal of thought into the design of the house, since Trevor designed the surrounding landscaping and wanted everything on the state to work together. Windows were carefully situated for how they framed the view of the river and landscape. Clinton’s stylistic choices were truly eclectic. The home was described by local newspapers at the time as characteristically in the Old English style, yet also as a French chateau inspired estate.

Within Glenview, the parlor and billiards room were on the east side of the great entrance hall, while the library and other rooms more used by the family than visitors were on the west to allow them to enjoy the river view. Between the dining room and library was the sitting room, opening onto the large veranda, called a “piazza” at the time. Another wide veranda, with a porte-cochère, was originally attached to the south end of the home as well.

In addition to offering views of the river, the verandas also helped keep the house cool during the summer. They insulated the adjacent sections of the house, and allowed for an intermediate area between the less-ventilated house and the unshaded outdoors on hot days. They and the other areas of the first floor were amply furnished with reclining chairs and rockers, reflecting the construction of the house with leisure in mind. On the second story, the master bedroom occupied the southwest corner, not only to take in the river but to take advantage of the southern exposure, which was difficult to get in many Manhattan houses.

Since his move to Yonkers, Trevor had worked with gardener John Wiffler on the property. Once Glenview had been built, Wiffler moved in with his family to the superintendent’s cottage. The two planted 200 evergreens around the house and grounds, and orange and lemon trees in front. Trevor threw himself quite passionately into his hobby, growing prize specimens and developing new breeds

In addition to its design for leisure and beautiful views, the history of the estate’s design shows the development of suburbanization. From the development of the neighborhood and the smaller homes on subdivided land plots, to the redesign of the back of house for better function and flow in the home. The inside reflected changes in house design that would later become common in suburban residences. In an urban house, rooms would have been stretched out to the back along the floor due to spatial limitations on the sides. As a result the dining room and kitchen were in the rear since they could be on the same floor. A pantry connected them so service need not go through the public areas of the house. This movement of back of house took place in Glenview Mansion.  Altogether, the architectural design of this home by Clinton involved a great deal of thought and attention to deal with its beautiful architectural interiors and functional flow. The home was planned so that the back of house would flow and so that the views of the river and landscape in each room would be optimal.