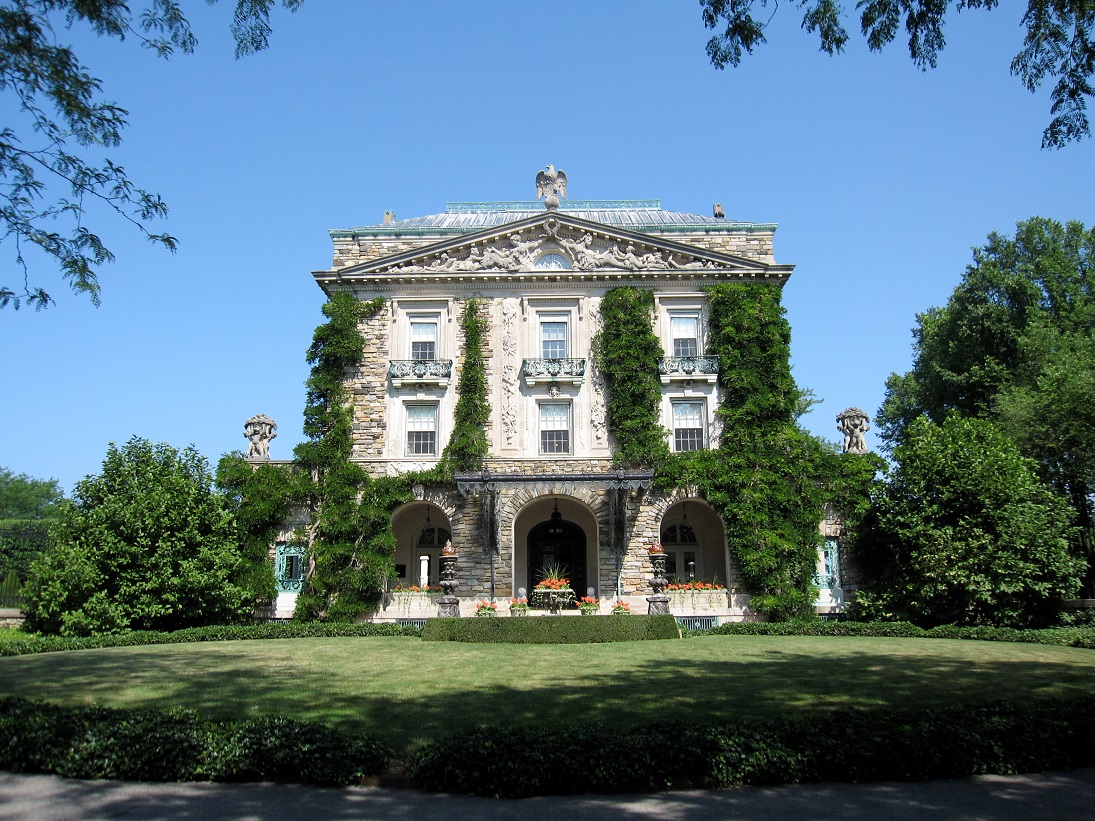 I spend a lot of time traveling to different homes that were primarily built during The Gilded Age. The Gilded Age was a Period of time in United States history that lasted from around 1879 to about 1905. Not too long after the civil war, this era was one of very rapid economic growth in our country due to the industrial revolution in the North and West. Immigrants flooded the United States during this period in hopes of achieving the American dream.

The powerful industrialists who we consider the men who built America were such men as Cornelius Vanderbilt, Andrew Carnegie, John D. Rockefeller, Andrew W. Mellon, Henry Flagler, Leland Stanford, Henry Ford, and JPMorgan, to name a few. These men were pivotal in the shaping of our country. Although there is always controversy regarding how they made their fortunes, many of them participated in great acts of philanthropy.

With such success, these men were able to build great homes that show the prosperity of the era as well as the development of and influences on American Architectural style. Many of these homes are now preserved and protected as historical landmarks. Along the Hudson River Valley in Westchester County, New York, one can visit a number of homes from this period.

I visit these homes as often as I can, for they inspire me and my work. I recently visited John D. Rockefeller’s (JDR) home, Kykuit in Pocantico Hills.

The acquisition, development, and occupancy of Pocantico is intertwined with the lives of six generations of the Rockefeller family. It has remained a private home, and the country retreat of JDR, his wife, Laura Spellman Rockefeller, their children, and their children’s children. The land was purchased in 1893 by JDR and developed until 1913 when the main house and extensive gardens were largely completed. Since then there has been many changes to the estate, with each generation leaving a distinctive touch.

In the summer of 1892, JDR and his son Jr., who was eighteen at the time, went to explore the land along the Pocantico, a stream that abutted William Rockefeller’s property. The two bought maps of the area and walked around until they came upon a hill standing some 400 feet above the Hudson River. They went to the top of the hill and found that the views from atop were magnificent.

In the seventeenth century, Dutch settlers had named this hill Kykuit, meaning “high point” or “lookout.” In earlier times it is believed that the hill was used by the local Tappan Indians to survey the area and send signals. The hill is the highest region along the ridge of land separating the Saw Mill River from the Hudson. There are clear views in all four directions. JDR set his sights on the Hill- he cared far more about views than having riverfront property. JDR said of the property, “At Pocantico Hills, New York, where I have spent portions of my time for many years in an old house where the fine views invite the soul and where we can live simply and quietly, I have spent many delightful hours, studying the beautiful views, the trees, and fine landscape effects of that very interesting section of the Hudson river, and this happened in the days when I seemed to need every minute for the absorbing demands of business” (Rockefeller Roberts, 10).

JDR and Jr. quietly acquired several properties around the hill and began to build the estate that would be their family’s country retreat. Kykuit hill would be the center of the family compound. The father and son called the land “Pocantico Hills Place” in its early development in their early letters to each other.
At the recommendation of William Rockefeller and William’s son Percy, JDR hired Warren Manning of the landscape design firm Olmsted, Olmsted and Elliot to assist in levelling the hilltop and prepare designs for the entire estate, including roads.

JDR and Jr. used loose stones from the Hudson River valley to build the house foundations, garden walls, and terraces. These stones were previously used by early settlers to form miles of walls before the Rockefellers reused them.
After careful calculations, upon JDR’s insistence, it was determined that he house would be oriented lengthwise on an ESE-WNW axis, so that it would receive maximum benefit from the greatest light the seasons had to offer. The entrance to the house would be from the Northeast , the road would then pass in front of the house and exit to the southwest. The remaining roads on the estate would be set into the earth below grade level so as not to obstruct the views. JDR supervised this work personally, and even decided which trees would be cut and which would be moved.

JDR preferred simple and straightforward designs. He disliked frills. He once told a biographer, “I hate frills. Useful things, beautiful things, are admirable; but frills, affections, mere pretenses of being something very fine, bore me very much” (Roberst , 12).

JDR gradually disengaged himself from his contract with Warren Manning as problems arose in his personal life, business life, and relationships with architects and designers working on Pocantico.

Jr. took over as his first project on the estate was to build a new coach barn behind the Parsons Wentworth house after the previous barn burnt down under suspicious circumstances. Jr. engaged the services of York & Sawyer, a newly formed New York architectural firm, to design the building. The carriage barn housed the family’s horses, carriages, sleighs, maintenance vehicles, and work animals. Work began in 1900 and the building was completed in 1902. The stone for the carriage barn was quarried on estate land and estate labor was used. The large stone building was constructed to be fireproof.

On September 17, 1902, a slow electrical fire destroyed the Parsons-Wentworth house on Kykuit Hill. JDR asked Dunham A. Wheeler, who was already renovating JDR’s Lakewood House, to draw up plans for another house in Kykuit Hill. Jr. however wanted the home to be designed in the Beaux Arts style, not the Gothic Revival and Half-timbered or shingled Queen Anne styled homes that Wheeler often designed. Jr contacted Chester H. Aldrich, a distant cousin of his wife’s, and his partner William A. Delano. Jr. then commissioned the two architects to draw up preliminary plans for a house on Kykuit Hill.

Jr. also commissioned William Welles Bosworth to design the home’s gardens. Although JDR did not want Jr. to spend so much money building the home, and felt that many of the expenses were unnecessary, Jr. convinced his father that he would be satisfied with the work. JDR found it uncomfortable to spend large sums of money on himself.
Upon completion, JDR found many problems with the home. JDR’s wife, Laura, felt that the third floor bedrooms were far too small under the steeply pitched roof to receive guests. The service entrance was situated directly below the master bedroom window. The noisy delivery and service vehicles made it difficult for JDR and Laura to rest. The elevator and water closets were also noisy. The problem that particularly bothered JDR was that the improper functioning of the down drafts in the chimneys, brought smoke into many of the rooms, causing discomfort and damage to the walls and furniture.
To remedy the flaws, JDR suggested that the roof of the house be raised to fix the faulty chimney drafts and made plans to construct a service tunnel beneath the approach road so that deliveries could not be seen or heard by guests and family. Both of JDR’s solutions were implemented. The service entrance was constructed, the roof was raised and flattened out, and a fourth floor was added for staff. This allowed the entire third floor to be reserved for guests. The original porch was removed as a result and the interior of the home became substantially larger. Impressed with Bosworth’s garden designs, Jr. commissioned Bosworth to design the new façade of the home and asked all three architects, Bosworth, Delano, and Aldrich to work together on the reconstruction of the home. All of the work, including the new forecourt, was completed in 3 years. The home, as it is today, was completed in 1913.

More on “The Big House”:
Kykuit is constructed of locally quarried rough-cut fieldstone and Indiana, limestone. The architects were William A. Delano, Chester H. Aldrich, and William Welles Bosworth. Bosworth also designed the gardens. The interiors were designed by Ogden Codman. The total collaboration produced a Beaux Arts structure. The façade carved by the sculptor Francois Michel-Louis Tonetti, is designed with allegorical figures from classical mythology. Reclining in the Palladian pediment are Apollo and Demeter.