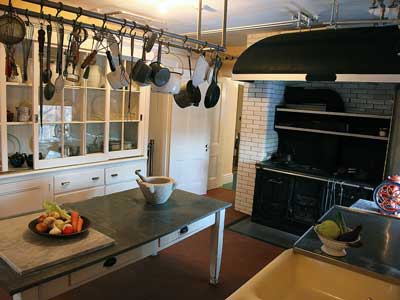 The early history of the estate remains unclear however it is believed that the home was once a large farmhouse. In 1845 the estate was purchased by Josiah Wheeler. Wheeler was a merchant in New York City. He remodeled the home, giving the estate its Italian style, with front and rear piazzas and a three-story tower. The home comprised of fifteen rooms by the end of Wheeler’s renovations.

The home was later purchased by FDR’s father James Roosevelt in 1866 for 40,000 dollars. For the next 34 years up until his death, James Roosevelt had many improvements of the house carried out. He enlarged the servants’ wing of the building and added two rooms. He also had a carriage house built on the estate.

After marrying Eleanor Roosevelt in 1905, FDR and his wife moved into Springwood with his mother Sara. The estate remained a central part of Roosevelt’s life in all stages of his career. During his presidency alone, he visited Springwood nearly 200 times. The estate functioned as a “Summer White House” where the President hosted his political associates as well as other prominent national and international figures. Further, Roosevelt used the estate as a retreat for himself and his political associates on the eves of all elections in which he ran for president. When the incoming results indicated that he had won the election, he would go outside onto the front terrace to deliver his acceptance speech.

Roosevelt made his last visit to Springwood in the last week of March 1945, about two weeks before his death. At his own wish, he was buried near the sundial in the Rose Garden on April 15, 1945. His wife was buried at his side after her death in 1962. Also buried here are Fala, the famous Scottish Terrier and Chief, a German Shepherd also owned by FDR.

In 1915, Franklin D. Roosevelt, together with his mother Sara, undertook a final major enlargement and remodeling of the home. This was done in order to accommodate his growing family, but also to create an environment for entertaining his political associates. Sara commissioned the design work of the firm, Hoppin and Koen from New York City. The size of the house was more than doubled by adding two large fieldstone wings (designed by Roosevelt), a tower, and a third story with a flat roof. The clapboard exterior of the house was replaced with stucco and most of the porch was replaced with a fieldstone terrace with a balustrade and a small columned portico around the entrance. These changes gave the exterior of the house the look of a mansion in Colonial Revival Style.

In 1943, Roosevelt donated the estate to the American people under the condition that his family maintained a life-time right to usage of the property. On November 21, 1945, after the family had relinquished their rights, the estate was transferred to the U.S. Department of the Interior. Since then, the estate has been administered by the National Park Service as a National Historic Site and is open to the public.